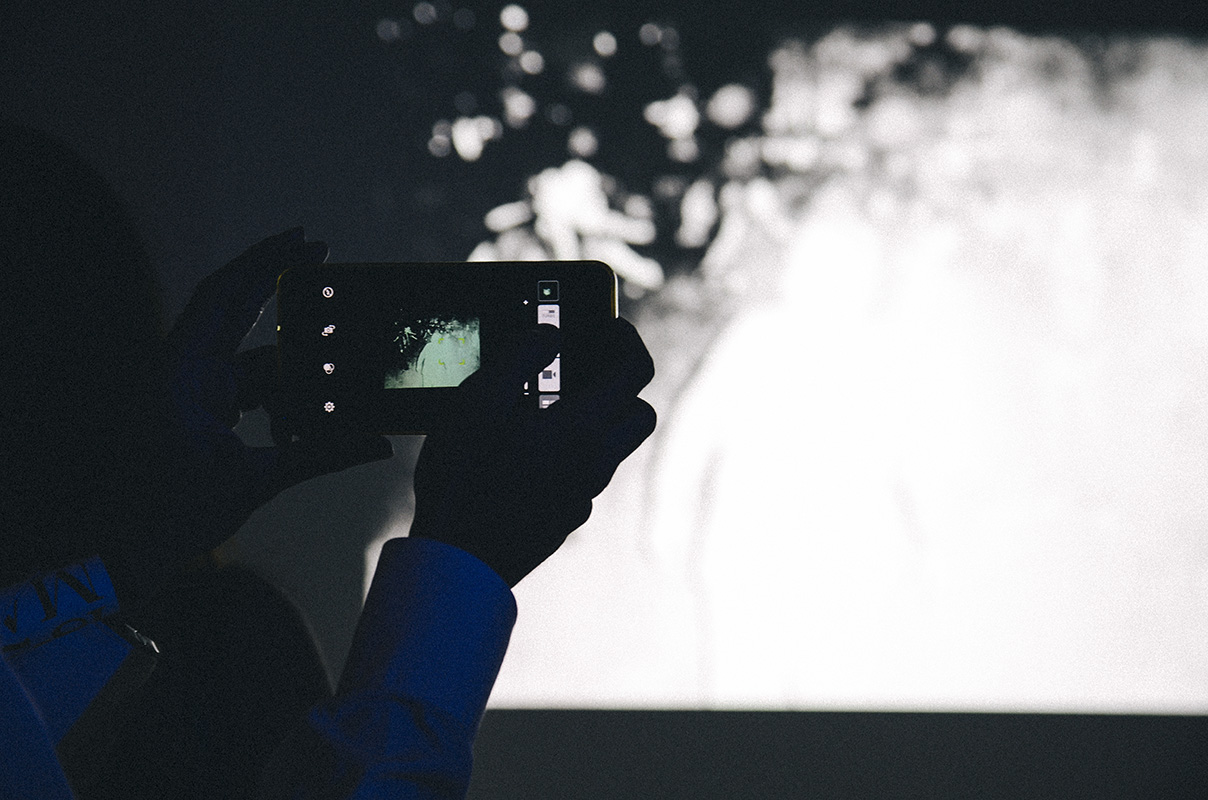 I went to the launch party of Thousandfold + Fotosemana Manila, “a micro festival of contemporary photography,” last Monday. I was covering it for Young Star, but my thing didn’t make it to print, so I thought I’d post it here instead:

Last Monday, as the afternoon was settling into night, groups of people piled into a warehouse compound, thumbing through books and printed matter, silently watching images flicker as projections on a wall. There’s a surprising reverence about it, all eyes trained on the slideshow of pictures, barely any words whispered. It was the first day of Fotosemana Manila, a micro festival of contemporary photography, the first of its kind in the Philippines and launched by Thousandfold.

Wawi Navarozza, herself a ubiquitous figure in Philippine photography, founded Thousandfold as an extension of her own studio. Though it started out as a library of photo books—in which Navarozza sacrifices her own personal copies for public viewing (“There are inscriptions in some; don’t read them!”)—it aims to fill a void in Contemporary Photography in the Philippines as the first active space for it. There are many places to showcase photographic work in the country, but one might be hard-pressed to find a space dedicated to the actual production of photography.

As the first public event of Thousandfold, Fotosemana Manila, “our very own festival for Contemporary Photography,” has put together several different activities to satiate photographic needs you might not even know you had. Described as a “peer group festival,” Fotosemana Manila aims to revive discussion and collaboration through said events scattered across the week, including a 3-Day Masterclass Workshop with Nicolás Combarro, in partnership with IED-Madrid, an “industry soirée,” a long table/round table, as well as Combarro’s first exhibit in Manila, held at Pablo Galleries in Taguig. There is also an International Photobook Showcase with beautiful photobooks on loan from Melbourne’s Asia-Pacific Photobook Archive, available to view and peruse until the end of the festival on May 24.

It is the slideshows, however, that Navarozza calls the heart of Fotosemana. “It’s a good way to see other people’s work.” During the launch, the crowd was treated to three slideshows: one featuring works selected by the IED-Manila, another a selection of local photographers, and another put together by Emaho Magazine. They were excellent examples of what Navarozza and Combarro had talked about earlier: fotografía de autor.

Considered a turning point in photography in the 1960s, fotografía de autor recognizes the photographer as an author and his photographs as a means to tell a story. This, and the recognition and push for photo books, is perhaps what sets Fotosemana Manila and Thousandfold apart from how photography is usually approached and seen by the majority. It answers the question of good photography with subjectivity and psychology rather than technicalities, an internal examination of what concerns the photographer rather than an external expression of facts or the “right” way to make a picture.

This project feels deeply personal. Thumbing through one of Navarozza’s books, John Baldessari’s Somewhere Between Almost Right and Not Quite (With Orange), I came across a strand of hair, black and stark against the page. I had been there for five hours and yet, it doesn’t feel like I’ve experienced the smallest fraction of what the festival has to offer. Fotosemana Manila is about collaboration and dialogue, a transparency between peers, in an attempt to tell stories through images.

One of the questions asked during the panel was about the role of Asian photographers in this shift of movement from presenting pure fact on film to creating stories. Navarozza and Combarro both mentioned a few photographers, but conceded that we have mostly relied on Western theorists because they’re the only available literature. Navarozza refers to Manila’s DIY culture and says, “When you can’t find what you need, you have to create it.” Thousandfold feels like a response to this void, a concrete move to build a photography community, instead of merely talking about the possibility of it. “If we don’t do it now, we’re not going to do it.”

I didn’t actually get to go back throughout the week, but I’m looking forward to the rest of what Thousandfold has planned. I was thinking how generous Wawi was to lend out her books—Erin said there was some type of membership involved, but even so—because I don’t think I could lend my books out… anymore. It’s so hard to get a hold of art books here, though. The Ateneo library has a great selection but it’s under lock and key the last time I checked because some idiots thought it’d be OK to rip out pages and keep them. ???

Anyway, if you missed Fotosemana Manila, check out Thousandfold’s website for future events. The space is really, really nice; it was previously Wawi’s personal studio. I think I’d drop by more often if it wasn’t so far from home.